I took the Go train from Hamilton early in the morning. Chris dropped me off and sort of showed me around. I took a lot of transit this year. More than I have in my entire life. You end up taking things for granted like; Signage, automatically updating signs, painted lines on the floor to lead you and tickets that have any indication of the rail line you should be taking.

I’m not sure who designed the Go train system. They really like green double decker train cars which are awesome but they seem to have never traveled before. There’s absolutely no signage. No markings on the railways, no ETA for arrivals and departures and not a single gate. What the hell? The only reason I made it to where I was going is an old man hustling for change.

He whispers to me through the crowd

Eerie. How do you hear an old man whisper in a group of one thousand? The thousand march with rubber soled shoes withholding any and all conversation. The entirety of the Go train was silent. A pin could drop and everyone would hear it but not a soul would move. This became so unnerving so quickly I felt an uneasiness growing in my stomach. My mind began to twist and turn and my eyes scanned the crowd on the unmarked platform.

To this day I still have no explanation as to why it was so quiet.

I asked someone if I was at the right platform. I was. I then asked why it was so quiet.

“You know this isn’t normal right?”

I still wasn’t sure if I was dreaming or not. We began conversation. I felt alienated. Backpack, beard and out of place. I asked if we could sit together and we set off. We started as per a normal traveler to commuter would. Names, jobs, what we do and whatnot. As always the question came though and I was explaining what I was doing, where I was going and where I have been. I noticed people started listening. Pausing their music without removing their headphones. Positioning themselves with just a little interest shown in their body language. I noticed it all. Flattering really even as this had become a nearly mundane experience for me.

I didn’t mind this morning. The sun came rising and cruising along the lake into the heart of Toronto was thrilling for me. A few times I had to stop conversation and just observe. With a quick apology we continued. I then asked when we got into Toronto if Lisa could point me in the right direction and she agreed. We ground to a halt stories underground and before the doors open the fellow sitting to the right of her with headphones in turned and said

“I really enjoyed hearing your stories today. I hope the rest of your trip goes well and it’s really nice to hear things that most would never do in their life. Good luck”

I think it was this day I realized that I was a little…weird. I came into this so gradually and softly that It never really crossed my mind what I was actually doing. This isn’t normal. You don’t just Hitch across Canada. Well, I guess you do. I do. None the less, I’m happy I could touch so many and help them along their own journey. Thanks For the Directions Lisa.

It was around an hour and a half to catch the next train. I got kinda lost in the station. I get lost everywhere. Not lost to the point where I’ll find myself 20 feet down a well without any chance of ever being found, but just lost enough that I kind of know where I am, I’m not worried that I’ll miss my train but I really have no idea how I got to where I am. Make the best of it, there’s always help to be found. Google maps pulled through again. Step by step navigation inside of the station gave me all the help I could ever need. In the future a trip based solely off of hard copy maps, guides and local direction is in order. No electrical help, it’s too easy.

Settled in, Economy class like always. Bag stowed above, phone charging and a nap in order. Shared my Aisle with a Medical professional specializing Laser treatments. The entire time I could only imagine attack Sharks with Lasers on their head. Or having a Lab Cat constantly driven crazy by the excessive opportunities to be scorched all the while its just “Playtime” for Mr. Kitty. Comical.

Shannon and I learned lots from one another. Initially the Class division and learned caution kept one another from even risking a conversation starter but some time into the ride we found peace in anothers company and we shared the differences in our lives and I learned she actually doesn’t strap Laser beams to Sharks, nor are Cats allowed in the lab. Back to the views. Anyone who has grown up and schooled in western Canada has seen in their Social studies (History) books the geographical differences in the west compared to east. You don’t think much of it until you’re hurtling through the country on a multi-wheeled human filled steel skinned diesel torpedo wondering how much of the history of this country is passing you by. The fall colours were in full swing and autumn has such a sincere beauty conveyed through the deciduous trees I haven’t seen since I was a child living in Virginia. This brought back a lot of memories for me from my childhood. I don’t think much of the past but I couldn’t stop myself.

We arrived in Montreal. I don’t really speak french. Shannon offered to grab a cab together. I obliged and away we went. It didn’t matter where it took me as it was early in the day and I had no plans. We headed downtown to her hotel. Exchanged goodbyes and I started to walk away. She stopped me and asked if I’d be alright. Of course I admitted. She asked where I was staying and I shrugged in return and kind of laughed. It didn’t matter to me, I’d figure it out. Shannon rolled her eyes just a little, we laughed. Off I went. This little Cafe helped me lots after I left the hostel.

Coffee. Go to Montreal, Food and Coffee. Enough said. That’s my only advice.

Hostel for the night, pack up and regroup my things, clean up. Make friend. La Banquise. Poutine. The line stretched a block. We waited an hour. Worth it. Time to go back to the hostel and head to bed. 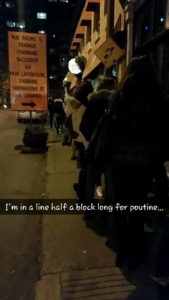 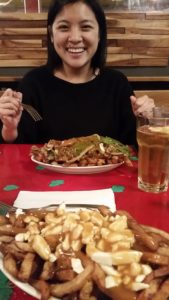 The next morning my glass was empty and I had zero interest in any goodbyes or social interaction. Checked out without a word and spent my day on transit exploring Montreal. It was amazing. I love this City. I can’t wait to return. The food, the people, the culture, le Francais, the god damn coffee! Montreal ruined me for Coffee.

Montreal Smoked meat Sandwich from a Jewish Deli with Mustard to die for? Check. 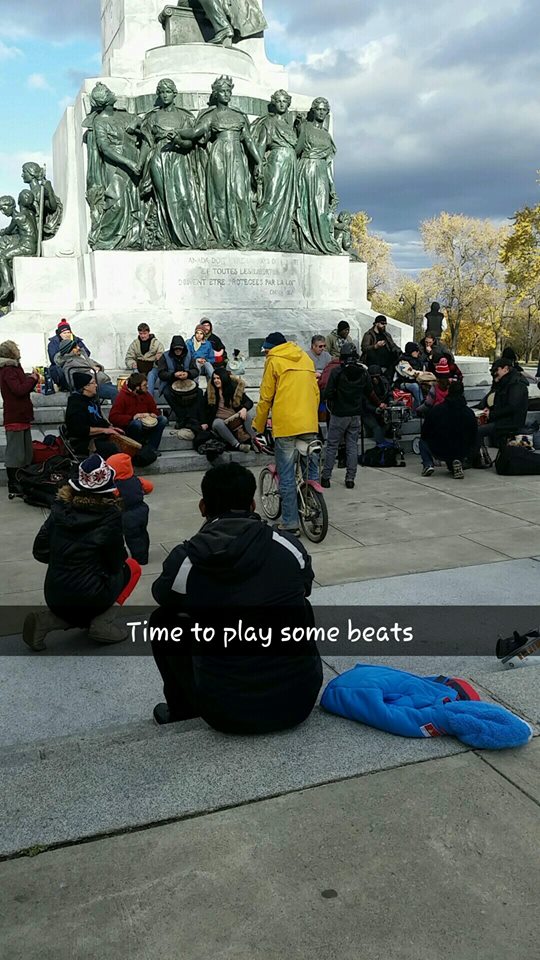 I’m going back to Montreal some time. I’d like to spend a week or so in the future. It was truly amazing.