It keeps raining, but not on my parade

The fog is hanging low today, temperature is dipping a little more every night as the onset of winter rolls a little closer every day. I have 8 days left before I fly to Calgary and 1300km to go. I have learned a lot this trip and I’m still in awe I managed to make it work. I managed to stay motivated through thick and thin and overcome every set back this far.

I remember about three weeks before this point I had posted on Facebook to ask what everyone was thinking about this whole thing, to see what they think I should do. Well, Here I am. So its a few hours to North Sydney, I’m about to get on to Cape Breton Island. The east coast has a lot of exceptional folks, also a lot of not-so exceptional folks. After being offered a variety of hard drugs five minutes into CB Island (See what I did there?) I managed a ride and off I was again. The highway has been becoming scarcer and narrower the further I head north. The landscape is shifting again and the watershed is becoming accentuated and I’m noticing just as the St Lawrence things are vastly different than I’ve seen before.

Another ride by a friendly guy, quiet and all through the Reservation turned into a full truck with the four of us cruising. Everyone knew each other. It’s a tight knit community and they know how to stick together. This had started feeling more like a Taxi service than someone just headed their way. The others are dropped off in town and I’m brought to the edge of the Reservation and let loose to my own devices. He turned around immediately. Not until later did I ever think anything of it. I’m white, some places I’m not welcome and I understand that now. Even in Canada we’re plagued with systematic racism and it’s been tearing at the threads of our society since we decided we “Own” this land. As I learned from my time alongside Aboriginals in Canada this trip, we’re people of time and date, the 12 month Calendar, Aboriginal are people of the Sun, Moon and Stars. We can’t accept that as a society and that may very well lay at the seams of our struggles. Mind you, its far more complex than a simple comparison of time management and understanding of when is when, as I had it broken down to me during my day on CB Island it’s just an understandable comparison to ease into the understanding of things far more complex.

I just wish we could all get along. We’re all the same, we’re all from Earth, we’re all made up of one another. Division will never achieve anything.

I’m on again. I’m with the Mayor now. He is exceptional. The water shed changing? Well, I’ve been following an inland salt water lake. No shit! It’s making some more sense now. I’m absolutely unloaded on with a massive bowl full of knowledge. This ecosystem is the only one like it on the entire planet and we’re destroying it more and more every day. The local communities have been aiding in cleanup and preservation for the last few years and it’s becoming a far more mainstream trend to support the activists and environmental researchers in their works. He had spent time with David Suzuki last week during a visit (Since he’s the Mayor and all) and he shows me a basket he was gifted during that time. So now I’m cruising along an endangered ecosystem, holding a basket from DS, in the same seat he sat in for his visit talking to the Aboriginal Mayor. I want to cry. Why can we let this happen? It’s all going to be destroyed in the next hundred years. What are we going to do next?

This day has already been so emotional for me. It’s only noon. I’m not even on the ferry yet.

So I make it. I’m dropped somewhere in a town I don’t know with no time for a Beer run. I get a sandwich and hop on the boat. I’m shuttled on a 30 passenger bus and I’m the only one there. The driver isn’t talkative. It’s seven hours to NL. It’s looking a little scarce as I make my way to the passenger decks. Compared to the hustle and bustle of BC ferries in the dead of summer it’s a ghost town. 30 people scattered across a ship built for thousands. We take on average seas at an average pace and split the Atlantic with the bow. Here’s another first. First 7 hour Ferry and Biggest ship to date. Not much to say about it, did a big Poo and had my sandwich. Sleep. Port Aus Basques wasn’t so welcoming. It’s late at night and I’m the only walk on. There’s only a few cars to hope for a ride and I look like an axe murderer. I can’t even find a damn walking path to leave the stupid terminal. Hopping fences and dipping security is my only real way to leave. What a nightmare. So all the cars have passed before I’m even gone.

I know why it’s called the rock. Everything is rock. I’m captain obvious. It’s actually beautiful but its pouring rain and the middle of the night. I can’t find shelter for the life of me and I’ve already been given the cold shoulder at the local Tim hortons. Roll with it. I’m still smiling as the sunshine pours out my ass because I’m living my dream. I was sixteen when I watched “Into the wild” I read the book this summer. It’s been six years and I’m doing it. I’m as far away as possible from home I can be in my own country and it’s exactly where I want to be no matter how hard it rains. It rains harder. I smile more. This is a good day. I have so much to think about and so much to live for right now. It’s hard right now and I’m being pushed a little further and a little further every day. It’s bliss. I’m stronger than I know. I scour for a place to hold up. No bueno. There’s an 80 dollar hotel. I can’t say no tonight. It’s miserable outside and I took too long to get my rain gear on. I run a bath. The water smells salty and flows just a little brown. Still smiling. Welcome to Newfoundland. Sleep

It’s on. Here’s some photos. I make it to Corner brook for the night and sleep in the ditch. I had some great beers, met some neat folks and someone bought me lunch today. Way she goes. 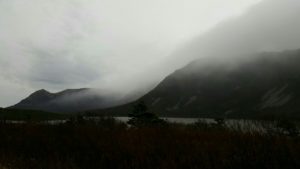 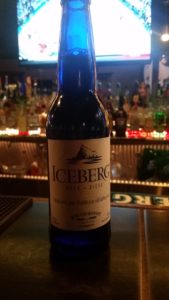 Tastes like Piss, But its made from an Iceberg! 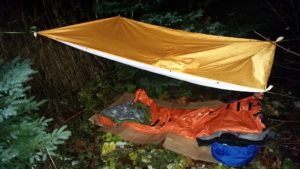